Choquequirao is one of the most surprising archaeological sites after Machu Picchu, it could even be considered the younger brother of the Wonder of the World. The only way to get to this incredible site is through a 4-day trekking. The reward that this trek brings is comparable to that of the Inca Trail, full of amazing landscapes and accompanied by one of the most amazing Inca ruins. That is why together with the experts from Cusco journeys we have prepared an article with everything you need to know about the ruins of Choquequirao. It is one of the best alternative or complementary tours to Machu Picchu. If you have enough time, we highly recommend that you undertake this route.

Description Of The Ruins

Choquequirao is one of the most remote Inca ruins located in the Peruvian Andes. The site is an ancient architectural site that stands at an altitude of 3,050m (10,000ft). The site rises above the Apurímac river canyon and rests on a flat hill. The information shows that it was built between the 15th and 16th centuries. It is believed that it probably served as an administrative checkpoint and place of worship. Despite so many centuries that have passed since its construction, 12 sectors of the site still stand, and each one of them has a variety of temples, houses, and baths to appreciate. Despite being considered a fairly large complex, only 40% of its totality is discernible. Since most of its structures are still buried underground. Today you can choose to tour these beautiful ruins on your own or with some of our varied tours in Peru.

The Choquequirao ruins are well preserved and maintained. But only about 50% of the entire site has been excavated. It is a fairly extensive archaeological complex and it is recommended to take a full day to explore it. Choquequirao has an architecture and structure very similar to that of Machu Picchu. It is made up of agricultural terraces, massive walls, and buildings with steep roofs. It’s estimated that the complex was built about 200 years before the Spanish conquest. As with Machu Picchu, the reason why it was abandoned is still unknown. Its remote location doesn’t make it as popular as Machu Picchu, but its views are unparalleled. Not being as popular as Machu Picchu, the tour is usually very relaxed and quiet. You will probably have the ruins to yourself along with a few other people.

The Story Behind The Ruins. 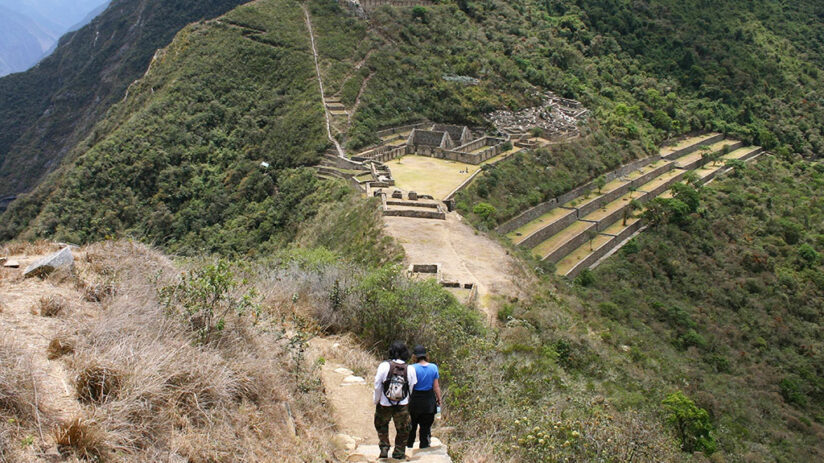 Choquequirao is a settlement of the Inca Empire dating from the 15th and 16th centuries. Although most of the history is theoretical and speculative, there is strong evidence to support that it was built between 1418 and 1471 under the command of Pachacuti Inca Yupanqui. During that period, Cusco was in the process of becoming a great empire, expanding throughout western South America. Some academics suggest that Choquequirao was built as a control point to Vilcabamba, the capital city and administrative center of the new Inca State. When Tupac Inca Yupanqui succeeded his father, the Incas remodeled and expanded Choquequirao to its current size. Choquequirao is believed to have been built around the same time as Machu Picchu. It was built in two different stages. The first stage was under the command of Pachacuti Inca Yupanqui.

The second stage was under the control of his son Tupac Inca Yupanqui, who expanded the complex that we know today. At the same time, during the Spanish conquest, the site served as one of the last strongholds of the Incas. Both Choquequirao and the entire Vilcabamba Valley were the hideout of the ruler Manco Inca.

The site was supposedly abandoned around 1572 when the Spanish authorities executed Tupac. The site was rediscovered in 1710, but it was looked down upon by not finding precious metals around it. Fortunately, it was visited again in 1909 by the well-known Hiram Bingham, where the corresponding excavations were carried out. If you are planning a trip to Machu Picchu, be sure to do a little research on this incredible complex. Perhaps you can choose to visit Choquequirao and learn more about the ancient Inca culture.

How To reach Them.

To get to the ruins of Choquequirao it is necessary to do a hiking route of up to four days. At the moment there is no other way to get there, but new future government projects plan to facilitate its access with the installation of a cable car. The hiking trail is a moderate challenge that requires some kind of stamina.

Unfortunately, if you are not in good physical condition, the route will likely cost you a lot of effort. But this does not mean that it is an impossible route to do. While the hike is low in altitude, it is not easy by definition. Most of the trail involves steep ascents or descents.

At some times of the year, the trail can look confusing or you find yourself in inhuman weather. But if you can handle the route and its difficult parts, you will have an unparalleled reward where you can experience one of the least known Inca ruins in Peru.

About The Choquequirao Trek. 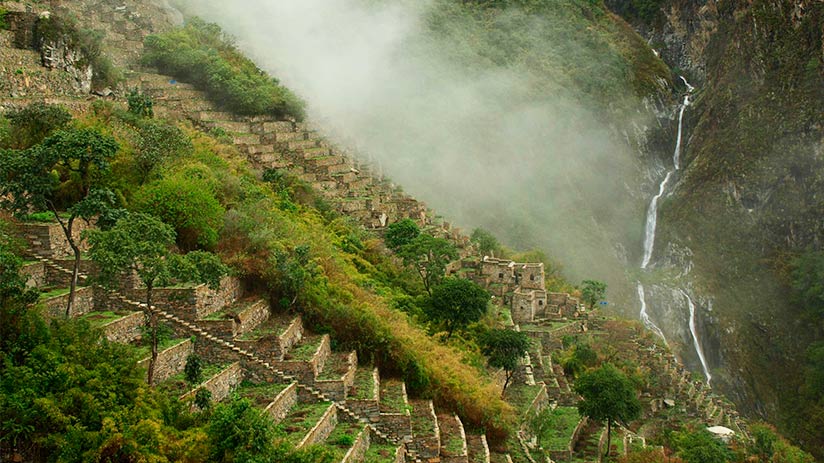 Most of the Choquequirao tours start in the city of Cusco. Travelers will find a great variety of options and alternatives that pass through Choquequirao. Although the most popular option of all is the Choquequirao Trek of 4 days and 3 nights.

This route follows the road to Abancay, although depending on your agency or operator, you will have different stops at other places along the way. After arriving at the picturesque town of Cachora, you will head towards the Capuliyoc or Kapuliyoq pass. This pass is the starting point for the trek to Choquequirao. Just a few hours of walking will take you to the camp named Playa Rosalinas. The camp is located about 1600 meters above sea level. It is here that most hikers have lunch and rest before continuing the ascent to the next campsite known as Santa Rosa. There you will rest for the night and have a delicious dinner.

The second day starts early in the morning with a steep ascent to the town of Maranpata. In this small town at 3000 meters high is where you will have lunch and get some air before continuing with the route. After your lunch, you will continue hiking until you finally reach Choquequirao. That it is only about 100 meters below Maranpata. You can make a quick visit before continuing to the overnight camp near the site.

The third day is dedicated to exploring the ruins of Choquequirao. You will have most of the day to calmly explore every corner of this wonderful site. You can explore the ruins at your own pace or together with a certified guide. It is a good idea to first hear a little about the history of the site before exploring the site on your own. You will most likely have the site to yourself along with a few other people. After you’ve explored the entire site, it’s time to go. At some point in the afternoon, you will start the hike back to Playa Rosalinas, where you will spend the night. Some tours may choose to leave the return trek for the fourth and final day. But this depends on a large number of factors such as weather, and the pace of the participants to mention a few.

If you have not started the hike back on the third day, the fourth day will start with a beautiful sunrise in Choquequirao. Then you will continue the hike to Capuliyoc, where the hikers will be transferred by car to Cachora and finally to Cusco. On the last day, you can stop for lunch before continuing the trip to Cusco. Keep in mind that some alternatives even offer the possibility of visiting both Choquequirao and Machu Picchu. Don’t miss out on this wonderful archaeological complex in Cusco.

Choquequirao is one of the most interesting unknown places in Peru. To fully tour the entire archaeological site you will need a few hours available. Fortunately, this trek does not require permits like the Inca Trail, so for a better experience consider hiring a reputable company.

The entire site has ancient irrigation systems, terraces, and temples dedicated to the cult of water.  Inside the complex, you will find a system of water sources along with channels that are linked to an aqueduct. In addition, you will also be able to appreciate a series of stone altars. These constructions are around the main esplanade, which at the same time is bordered by agricultural terraces. The main ruins are scattered along the slopes of the main mountain. The different ruins are grouped into small “districts”.

It is believed that this urban design was planned to designate social functions in the complex. In itself you can divide Choquequirao into three main sectors, the highest sector contains warehouses, the mid-altitude sector contains the main Ceremonial Plaza, and the lower sector to the south was reserved for ancestor worship.

Some tours also combine Choquequirao with other sites on much longer itineraries. If you plan to visit Machu Picchu, you can choose to combine these two amazing routes and make the most of your stay.

The whole experience, from the hike to the exploration of the ruins themselves, is a set of emotions that will take your breath away. The hike and the tour of the ruins are one of the best Machu Picchu alternatives. One of the advantages of the route is that it is not usually populated by many other hikers, which provides a much more private experience.

You will be able to appreciate the landscapes at your own pace and pass through the villages while interacting with the locals.  You will not find disadvantages to visiting this wonderful archaeological complex. Being less popular than the Wonder of the World, this incredible route is often overlooked by many.

It is much cheaper than Machu Picchu, but to access it you need a certain physical state. Still, the reward this complex brings is one without precedents.

If you have an adventurous soul and enjoy trekking in Peru, you cannot miss this wonderful route.

Even if you’re just beginning to dream of your trip to Peru, click here to chat with one of our Cusco Journeys Experts.